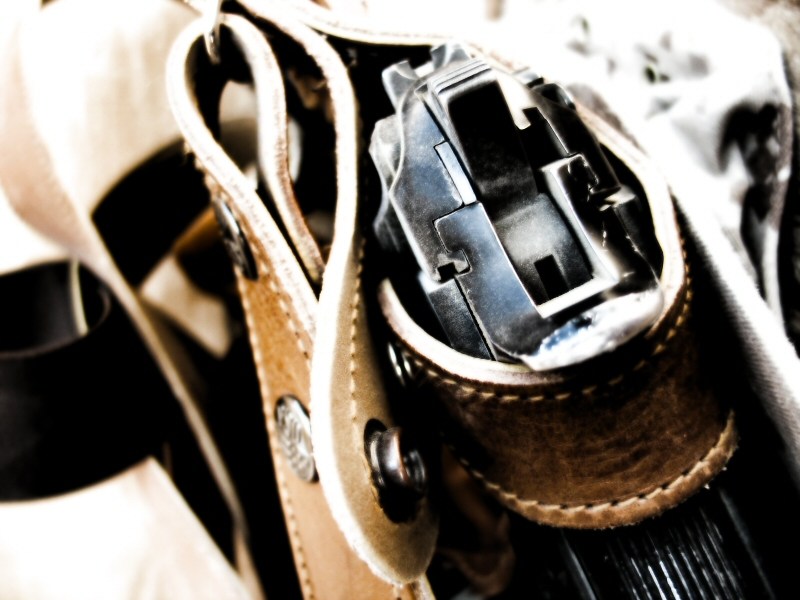 The M9 pistol has been on the market for quite some time, and maybe you want one for your very own or maybe it was issued to you. You also might be wondering what the best M9 holster is. Let's look at it.

Before diving into more detail about this pistol, let's look at carry options for the Beretta M9. Since it is a military issued pistol we will mostly see a M9 holster for military use. This generally means open carry/duty use and not concealed carry. This means coverage of the trigger and positive retention of the weapon (especially during physical confrontations) is important.

A Safariland M9 holster is more than likely going to be your best bet for a quality holster with off the shelf capability for the M9 line of pistols outside of buying directly from Beretta.

This particular model allows for carry with and without a light or other rail mounted hardware, which is facilitated by an adjustable area on the holster. It will fit the M9, 92F, and 92 Vertec. It uses a rotary hood for additional retention and it works with Safariland's MOLLE Lock System.

This model is ambidexterous so it can be worn on the right or left side and the retention hood can be switched to accommodate either side. There might be some concern about how much of the trigger guard is not covered, but then again this is an open carry option and is not put down one's pants, so the requirements are different. This particular model is designed to ride lower on the belt as a better alternative to drop leg holsters (which are usually worn too low on the thigh anyway).

This Safariland Model is more protective than a military issue M9 Holster, especially if that holster is a SERPA. This entirely covers the trigger guard, has a suede finish inside to protect your sights and firearm finish, and has a retention hood. This is in addition to the holster featuring Safariland's Self Locking System (SLS).

The body of the holster is ambidexterous and includes a Universal Belt Loop that can fit up to a 2.25 inch wide duty belts. This particular holster is made out of their trademarked SafariLaminate for a durable, abrasion resistant holster. The 6230 also can a be used with or without lights or rails, making a it a good starting holster for your M9 with the ability to add more tactical accessories.

This model does not exactly fit the description of a Beretta M9 Military Holster but we will include it because a concealed carry option is always handy.

This paddle holster is injection molded, suede lined, and features Safariland's Auto Locking System. Unlike the other models, this does not feature the ability to have a weapon mounted light, although there are some concealed carry holsters that do offer this option.

This holster keeps the gun close to the body lending to its ability to be concealed. Fits a large variety of M9 Style pistols.

About the Beretta M9​

The Beretta M9 was adopted in 1985 by the U.S. Military and its official entrance into service was 1990. It has been used in several military actions such as the Persian Gulf War and the War in Afghanistan. It is set to be replaced by the new Sig Saur Modular Handgun System, this means there is a chance that military M9 surplus hand-me-downs will be available to the general public, although their prices may be three times a factory new M9.

The Beretta M9 is a large and reliable pistol if it is properly maintained, which most military service weapon are not (so the surplus M9 would best be used as a collectors item rather than a civilian defensive weapon). The M9 is basically a 92FS model pistol set to military specifications making for a rugged pistol.

The M9 is not a lone mountain in Beretta's product list but they offer various models for various tastes and requirements. One example is the M9A1, specifically designed for the United States Marines and used to replace the M9 in 2006. It features a beveled magazine well for easier and faster reloads, more aggressive checkering for the grips and an integral rail.

The integral Picatinny MIL-STD-1913 rail (one slot) allows the user to attach lights and lasers to the underside of their pistol's barrel to expand the capabilities of their M9A1. There were also additional features added to the system to aid the pistols use in sandy environments like Afghanistan such as a more sand resistant coating (Physical Vapor Deposition coating) and sand resistant magazines. Other than these things the M9A1 is nearly identical to the M9/92FS in regards to features such as sights, magazine releases, and safety decockers.

The next upgrade to the M9 design was the M9A3 (the A2 never saw production) in 2015. Slated to renew the contract between the U.S. Army and Beretta the M9A3 failed to do this, but it created another great option for the civilian market.

The M9A3 features a removable front sight for greater customization, Vertec grips for better concealing ability (capable of being switched back to the classic M9 design with a wrap around removable grip), an enlarged magazine release, and the ability to change the safety decocker to decocker only with its universal slide.

Other big changes to the M9 design in the M9A3 were its improved magazine capacity (17 instead of 15, with 10 being the standard), the three slot Picatinny rail, and suppressor ready threaded barrel. There is also a polymer recoil guide rod and a newer earth tone finish for the M9A3.

Two other available option for training and fun are the M9A1 22 and M9 22LR. The M9A1 is a .22 copy of the M9A1 designed to help with live fire training of fundamentals and accuracy with much less kick than 9mm and was introduced in 2016. They also provide an exact replica of the M9 in .22 with the M9 22LR and is marketed for training newer shooters in a cost efficient package, but these are more training aids than serious carry options

So, What's the Best Holster for the M9?

For the most part the holsters offered by Safariland are very suitable for duty use, whether that duty is in law enforcement or military. The ability to add lights or light/laser combinations to the ability that the M9 offers, especially as the newer M9A3 becomes more available. The M9 line is a very viable option for those who do not like Glock pistols, Sig Saur's pistols, or more archaic designs like 1911s or Browning High Powers.

Is the M9 the best option out there? No. It has long passed the time from when it was the bleeding edge of firearms technology. But places like Wilson Combat and Safariland still offer upgrades and holsters for the platform, and it is still in use in several areas. And as it's fazed out from law enforcement and the U.S. Military the surplus stock (especially from the law enforcement agencies) will make it into the civilian market as affordable and dependable self defense options.

Of the holster featured in this article the best would most likely be the Safariland 6230 from the better coverage of the trigger guard. But the reason it is not mentioned first is that some may find the adjustability of the 3280 more appealing than having a bunch of extra space just below the pistol grip in the holster.

It must be stressed that most of Safariland's quality products come at a comparatively high cost. The cheapest holster on the list has been described as low quality for Safariland, but the cost is relative to the quality in this situation. Most quality holsters are much closer to the $100 price line, and in regards to buying direct from Safariland, their holster regularly fall above the $100 price line and some inch toward the $200 line.

For some the M9 is an issued weapon, so there is little personal choice involved. This does not mean the M9 is terrible or that they should not try to find the best M9 holster. It just means that they have to train more and research more for their needs. Hopefully this article has helped inform you of the options available for the M9 line of pistols, especially for military use, and that you go forth with the tools you need to equip yourself with quality gear.

And remember the needs for open carry are different than that for concealed carry, and along with them come different scenarios and mindsets