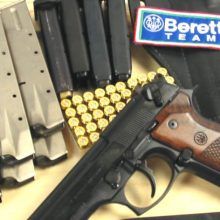 So, you want a defensive handgun, but you don't want a newer handgun. You want something that has a bit of history under its belt, but not as old as a 1911 and you like the appeal of a full metal gun. You look to the M9 or, its equivalent in the civilian market, the 92FS. But what do you need to know? Is it viable? What's the best holster for the Beretta 92FS? Let's find out.

The 3 Best Holsters for the Beretta 92FS​

About the Beretta 92FS​

The M9 was developed in 1972 and adopted by the military in 1985. The FS model was designed to counter some problems with defective slides encountered in testing by adding an enlarged hammer pin. The large hammer pin fit into grooves cut in the underside of the slide and was supposed to keep the slide from coming off if the slide cracks.

The 92FS model is a beast of a handgun, especially in the modern market, not only in performance but mostly in its dimensions. We will compare it to its closest competitor in its size class just to get a grasp of the gun's overall build and size, but first let's look at the Beretta's features.

Once the gun is fired from the hammer down position the hammer is cocked by the slide reciprocation putting it into its single action mode. Why does this matter? This matters because it changes the trigger weight between the first shot and the second shot, with all following shots being in the lighter trigger pull weight.

This causes problems by making a consistent trigger pull harder because of the variances of weight. This means that more training time must be spent on the Beretta than a Double Action Only pistol because the heavier trigger pull tends to make the gun wobble to one side or another (throwing off accuracy) and requires a lot of work to get used to.

Other features include an aluminum and steel construction, an external ambidexterous safety/decocker, and a reversible magazine release. The Beretta also has an external extractor with a color coded loaded chamber indicator.

It also features an open slide design to help reduce malfunction such as a stove pipe malfunction (A failure to completely extract a shell casing getting it to stick out of the extraction hole like a small stove pipe or industrial chimney). It also operates on a short recoil delayed locking block system for faster cycling (meaning quicker follow up shots).

Is the Beretta 92FS Good for Concealed Carry?​

As to whether it is good for concealed carry, we will look at the Beretta 92FS compared with the Glock model G17, its closest competitor in size and function.

We will be ignoring the major differences of a lack of external safety and an external hammer and that the Glock is double action only. They both have external extractors and are chambered in the same caliber. So we will be comparing capacity, overall size and weight.

One of the major factors for using the Beretta as a carry gun is its weight. The Beretta 92 FS weighs in at 33.3 ounces, just over 2 pounds, unloaded. In our comparison the G17 comes in at 32.12 ounces loaded. That means the Beretta weighs more unloaded and that affects its use and carry.

Does this mean it is not a viable option? No, it means there are certain consideration to be had about using it as your carry option.

As a carry option it has a decent magazine capacity with the standard magazine being 15 rounds (two less than the G17), but it also offers 10 round magazines to allow for certain area restrictions and a 30 round magazine for those extended practice sessions. Also with it being so large (and with various aftermarket and specialty options) the 92FS can have a weapon mounted light to aid in low light scenarios.

But because of its weight, the Beretta 92FS requires a quality holster to secure it to one's person. SERPA, despite being a military holster, is not recommended because of the safety concern produced by the release being set right on the trigger area. Although there are some shoulder holsters for the Beretta they lend themselves to concealed carry only with blazers and other suit coats.

A quick search online brings up a number of options that fit the description Beretta 92FS holster. But most have an alarming lack of trigger guard coverage which is a huge safety problem. Because it is such a large pistol the primary concern is covering the trigger guard and not necessarily the entire pistol like some holsters, although there are quality holster that cover most of the pistol.

Let's look at some of the better options.

Safariland holsters are considered top of the line in regards to duty holsters especially for open carry. In regards to the 92FS it is recommended to use a belt with this paddle holster as it will need more support than just pants will provide.

This particular holster will not accept a weapon mounted light (WML) or more specialized models (such as the Beretta Brigadier).

It also features a suede lining so that the finish on your firearm will not be damaged. The primary reason to choose Safariland is its automatic locking system (ALS). That and its quality and adaptability is why law enforcement professionals and other training focused individuals choose Safariland.

Produced by Beretta itself, it's guaranteed to fit your 92FS. It features a high ride system and is another paddle holster set up for stability. Buying a holster from the manufacturer of the pistol you bought it for is a safe bet for having one that actually fits the needs of your pistol.

This model is kydex for a more modern style holster with less of the problems that leather has.

A leather holster made by Beretta, Model number 5. Beretta states its design to fit on the left and right side of the belt. It also features a thumb break safety, which Beretta emphasizes as a natural way to open and draw the firearm.

The holster features a release lever that is wear resistant, rigged, and sensitized. It is marketed as compact so it may run into problems with wear over time much sooner than less compact holsters. It will not fit any other models with picatinny rails or the 92A1, but will fit all other 92/96 series pistols offered by Beretta.

As part of the conclusion we will address why there are so many mixed reviews for the M9 and 92FS series of pistols.

Everywhere except the military sings the praises of the quality of the Beretta 92FS. The reason for this is law enforcement and private citizens take care of their personal firearms while the military does not.

In the military they are put into a collective pool and can go through multiple users, random round counts, and cleanings by indifferent individuals while being stored in less than ideal conditions.

Because of this, the M9 experiences a lot of malfunctions from too many people handling them as examples and being used by individuals who have next to no training whatsoever.

That being said, when it is properly maintained and trained with the 92FS is a quality handgun. Despite it being a very heavy pistol, the weight can help with recoil mitigation. It holds almost as much as its competitors in the defensive pistol market, but it mainly comes down to preference.

There is also a decent sized aftermarket for upgrades and various other gunsmithing needs. Police trade ins also make the 92FS very affordable while a little research can help you find the best holster for a Beretta 92FS that suits your needs.