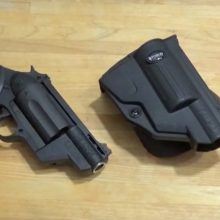 You might be looking at the Taurus Judge as a carry option. You also might be wondering what the best holster for a Taurus Judge is.

First we have to understand what the Taurus Judge is and what it's capable of as well as certain reports. Taurus Judge is a revolver with a double action/single action trigger (DA/SA) capable of using .410 shotgun shells, .45 Colt, and some special models a .454 Casull load out. It comes in a variety of options ranging from 2.5 inch to 3 inch chambers, polymer to steel frames, and 2 inch to 6 ½ inch barrels.

All the models feature a red fiber optic front sight although customization is most likely available. The fiber optic can help with finding the sight and comes down to personal sight preference. Most options also feature a low rater low capacity of 5 rounds while the options that feature the .454 chambering have a 6 round capacity.

The Taurus Judge is a rather heavy gun comparatively. The polymer style 2 inch barreled variant weighs 27 ounces (assumed unloaded, 4 ounces heavier than a Glock 19) and the 6 ½ inch Raging Judge model comes in at a whopping 73 ounces or 4.5 pounds (roughly two and half loaded Glock 19s or just under two 1911 style pistols). This is a factor if you are going to be carrying it with you all day every day. Additionally the poor quality control of Taurus on Taurus Judges must also be taken into consideration with reports of barrels coming unpinned, making the gun inoperable, after firing a single set of cylinders. This raises issues as to how reliable the gun for serious defensive use.

Putting that aside we'll look into what the gun is chambered in. Starting off with the odd one, the Taurus judge can fit a .410 bore shotgun shell, the second smallest shotgun shell on the commercial market. It comes in a variety of shell lengths, and correspond to the chamber lengths of the Judge. The 2 ½ inch shell feature3-4 000 buckshot or 8 pellets of No.4 buckshot while the 3 inch shell holds 5 and 9 pellets respectively. The .410 and .45 colt have roughly the same diameter which allows for them to be used in the same gun. Taurus states that their rifling in the Judge makes for a nice tight pattern when using the .410 option. This tends to mean that you are more likely to have more projectiles flying around if you miss, which can become a legal liability but makes it quite handy for shooting small pests/game.

The next type of ammunition it can fire is the .45 Colt. Unofficially called the Long Colt to differentiate it from the .45 S&W Schoffield cartridge and the .45 ACP cartridge. This round has been in manufacture and use since around 1872. It has been slightly modified over the years, especially after it was picked up in the 1950s for larger and stronger framed handguns. Modern manufacturing loads and hand loads set the .45 colt in the range of .45 ACP and .44 Magnum, although the high pressure round require newer manufactured firearms and not original or replica .45 Colt pistols.

The final type of ammunition to be able to be put through Taurus Judge model pistols, specifically the Raging Judge variants, is the .454 Casull. The .454. Casull is a .45 Colt variant introduced to the market in 1959 and developed by Dick Casull and Jack Fullmer. The .454 Casull is basically a lengthened .45 Colt casing with better structure. Currently one of the most powerful handgun cartridges available, designed for hunting medium/large game, protection against bears, and shooting metallic silhouettes. It possesses almost 5 X the amount of recoil than the .45 Colt and 75 percent more recoil than a .44 Magnum. This means that it is a chore to shoot especially if you try it from the shorter variant of the Raging Judge. Both Raging judge models also are quite expensive because of the weight and other factors of using a .454 chambering placing them at almost double the cost of a standard Judge.

Now that we have a basic understanding of what the Taurus Judge has we will look into what kind of holsters for a Taurus Judge Public Defender model or other Taurus pistols.

This holster for a Taurus Judge with a 3 inch chamber is one of the better options for concealed or belt carry for a Taurus Judge. The 3 inch model (known as the magnum model) will fit in this holster like a glove. It can accept a 3 inch barreled gun and no more as the stitching closes up the bottom. This leather holster can fit up to a 2 ¼ inch belt or smaller for dominant/right side carry and a 1 ¾ inch belt for cross draw carry (not recommended).

It rides high and features a forward cant. It also nicely features a thumb break release for quick and easy draws. The thumb break also holds the hammer in place making the need for a fully covered trigger less of an issue with this particular holster. If you are looking for a Taurus Judge Magnum holster this would be one to choose.

This quality Taurus Judge Holster is well made and will accept a 3-inch barrel and a 2 ½ inch cylinder. Other models from Galco are available for the other models but this one is geared toward a non-magnum Judge. There are some concerns that the wrong gun is molded for this holster, but you can easily find Galco's website and find the correct model of Taurus Judge holster.

This model features a finger release snap, similar to a thumb break but on the opposite/outer side of the holster. This just means more training with the holster is required. This holsters protects both the trigger and the hammer of the gun.

This chest holster is more geared toward trail usage but it is a Taurus Judge 6.5 in. barrel holster. It can fit other Taurus Judge models but is best for the longer barrel models.

This has an outer snap release to make sure your gun doesn't flop out the holster. This is made to go over your clothes and outer garments, rather than be concealed. The retention screws and straps are adjustable for a comfortable fit not only for the gun but for the wearer's use. Features heavy duty nylon stitching for durability.

This holster is left hand oriented but it can be found in a right hand configuration. This Taurus Judge shoulder holster is designed for the polymer models of Judge and is open at the base of the holster so that longer barreled pistols could be used. It also features 5 loops for spare ammunition, although this would make for a longer reloading process as compared to a speed loader. Because of this, this is more geared to a less stressful environment.

This product is featured here for more of an example of the options out there for left handed people or available models of shoulder holster as most of their examples for their right hand options are stock photos of the wrong type of firearm used.

This speed holster features no retaining strap but covers the trigger guard. It is forward canted and can fit 3-inch barreled Taurus Judge with up to a 3-inch cylinder. This is more geared to concealment rather than open carry since it doesn't have a retaining strap. It's available in black or tan.

The options for carrying a Taurus Judge are a variety of quality that is unfortunately not found in the gun itself. There are large variety of better quality options in both the wheelgun and the semi-auto world when compared to the Taurus Judge that are at or cheaper than the price of a Judge. Compared with a bit more specialty ammunition make the cost to run and train with a Judge higher than other guns.

The Judge is also more prone to failure. This high failure rate needs to be evaluated before purchasing the pistol, especially if it is intended for heavy use. Because of this it is highly recommended that you do not choose this for your carry gun, predominately if the gun breaks from merely practicing with it. Additionally the weight/capacity trade off is too high for the Judge when compared to other options.

Hopefully this article has made the options, problems, and abilities of the Taurus Judge line of pistols a bit clearer for you. In addition to this if you have decided to purchase a Judge anyway you have hopefully gotten an idea of the best holster for Taurus Judge revolvers.

Does Galco make a holster for the Taurus Judge 3″ barrel & 3″ cylinder?? Belt holster – right side. Thanks