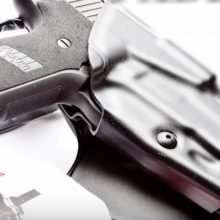 You might be looking for a mainstream alternative to Glock for concealed carry and decide to look into Sig Sauer's pistols. You might decide that you want to get a P226 line of pistol, you might also be wondering what the best holster for a SIG P226 is, let's look into it.

There are a variety of options in the 226 line with different options for each. So we will be looking at three variants: the MK25, the TACOPS,and the Legion models.

We will start off with the MK25 as it has the least variation in it. It, like the others mentioned, is a full sized handgun. This model is offered only in 9mm and is a Double Action/Single Action (DA/SA) external hammer gun. This means that once the safety is turned off it can fire with the hammer down or with the hammer back. The difference is that the trigger pull weight will be different between firing in DA and SA. This can be overcome with practice and can help with dry fire training. This model also features a rail for lights and other devices but no upgraded sights.

The P226 Legion features several cosmetic features in addition to G10 grips. It also features a Short Reset Trigger and upgraded X-Ray Day/Night sights. The DA/SA variation comes in 9mm, .357 Sig, and .40 S&W, which features a low profile decocker and slide release. The Legion model also comes in single action only option, making it similar to a 1911 style pistol, requiring that the hammer be pulled back before the firearm can be fired. This one is only available in 9mm.

The next option is the TACOPS model. This Tactical Operations model features a Tritium TRUGLO Fiber Optic front sight and SIGLITE rear sights designed to help with low light aiming. It also features the short reset trigger and is DA/SA. Depending on the model chosen, it is also suppressor ready (remember to not fire it with the thread protector in place otherwise it could damage the threads and prevent the firearm from being disassembled).

It is available in 9mm, .357 Sig, and .40 S&W, although all stock options are listed as 9mm. For magazines, the TACOPS comes with four of them right out of the box with the option of either having 10 round mags or 20 round mags. Your choice would depend on your local laws.

Let's now look into holsters. For a SIG P226 MK 25 concealed carry holster there are a number of factors to consider. Depending on how comfortable you are with the weapon you will have to consider if you want the holster inside or outside the waistband.

Given the size and the metal construction of P226s people tend to favor paddle holster that are outside the waistband (OWB) because of the stability they offer. In addition, it has an external safety. This means that training to disengage it while drawing it needs to be employed. What this means for the holster is that the added safety of an external safety does not out weigh the need for the trigger to be properly covered. The external hammer means that sometimes the hammer can be accidentally pulled back, but because of the safety it should not be a problem but proper safety should be used at all times as the safety could fail.

Another thing to consider is that the Mk25, TACOPS, and Legion are all railed pistols. Your holster must be setup to be able to accept a railed pistol or a pistol with a mounted light, depending on how you are going to carry the pistol.

With that in mind, let's look at some of the best holster offerings for P226 holster.

This holster is one of the few that actually specifies that it is for the MK25 P226 setting it first in the category of the best OWB holster for a Sig P226 MK25. This features the Safariland Auto Locking System for proper retention of the pistol. The raised stand off surfaces in the holster allow for dirt and other debris to be easily cleared from the pistol while drawing it.

It can resist up to 300 degrees Fahrenheit and down to -50. The holster will also retain form and function after being submerged into water for an indeterminate amount of time. Since it most likely will be under a cover garment, the holster does not need a retention strap for it. It does not feature a paddle attachment.

This paddle holster comes in second on the list for best OWB holster for a Sig P226. It is setup to accept a P226 with rails which the Legion, MK25, and TACOPS all feature. The holster may mar your pistol finish but if that's what you are worried about you do not have your priorities in the right place to carry a pistol. This also features the Safariland ALS but it also includes a stabilizing flex paddle. It is designed for carry 3 o'clock to 4 o'clock. It also doesn't feature a retention strap.

This duty holster fits for the bill for the best tactical holster for a Sig P226. It can fit a Sig P226 with a light mounted on its rails. This holster also feature the Auto Lock and Self Locking Systems (ALS/SLS) from Safariland.

Another great feature is the retention hood since it is designed to be worn openly on a duty belt up to 2.25”.

It has a mid and low ride option to put the holster on the lower part of the belt or below the belt line. This means it is more designed to be worn at 3 o'clock as well.

This model fits a variety of Sig pistols with rails in at least two different calibers. It only has level II (2) retention so it does not have a protective hood nor does it have as much retention in a scuffle than a level III retention holster. However, it will provide better retention than a standard holster.

It features a thumb break retention strap and it can fit a standard belt. It also features the same resistance to environment as the first holster on our list, but is meant for open carry, and sits lower than the belt.

All of these holsters are from Safariland mainly because Safariland is one of the only places to offer a quality holster option that is not custom made. There are a number of kydex holster manufacturers that make custom options for P226s, but if you want off the shelf, Safariland is more than likely your best bet.

The P226 style pistol is a decent design for a carry pistol. It will require more training to get the hang of, since DA/SA guns are considered more of an advanced shooter's pistol. This combined with any holster system makes training even more important with a P226. The TACOPS option has a very good capacity for a standard magazine, but should be purchased in a non-suppressor ready option as that lengthens the barrel to a point where the standard holster may not work. If you are restricted in what you can carry magazine wise, Sig offers 10 round and 15 round magazine options.

As a 9mm option P226s are right up in the market next to Glocks and Smith & Wesson Shields. They have been issued as duty guns to a number of agencies but the support available for Glocks as well as the after market options put the Glock ahead in regards to support. Which is something to consider when getting into carrying a handgun. The all steel construction of the P226 also makes it a very heavy pistol, which some may find uncomfortable in addition to it being a full sized model. If you got a railed model it also allows for you to add a weapon mounted light to aid you in identifying potential targets and avoid making a costly mistake in a violent encounter.

For the most part there are worse option to carry than the P226 in any of its forms, whether MK25, Legion or TACOPS. Considerations for carry one include aftermarket options, sights, spare magazines, holsters, add-ons, and spare parts. Above all you should also plan to and find opportunities to train and practice with the P226 in what ever configuration you choose. The TACOPS seems to be the best option from a capacity stand point if your location allows for the carry and use of magazines in excess of 15 round magazines.

Hopefully this article has given you an idea for the best holster for Sig P226 in the context of your carry options.